KidsOutAndAbout Review of Sky Zone - Trampoline at its Most Fun in Rochester, NY | Kids Out and About Rochester

KidsOutAndAbout Review of Sky Zone - Trampoline at its Most Fun in Rochester, NY 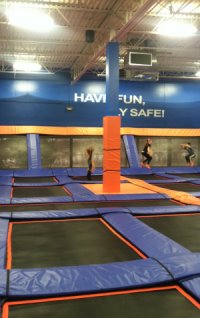 It was Christmas break week, and the natives were getting restless! After all the excitement and eating that occurs at our house during this week (and I am sure we are not alone), we decided to take a trip to the new Sky Zone Trampoline Park, to purge ourselves of some of the excesses of the season. We headed off with the cousins for a new and adventurous experience.

Sky Zone Trampoline Park officially opened its doors in Rochester on December 13, 2013. Located just off 390 near Ridgeway Avenue in Greece, 155 Bellwood Drive, Sky Zone is a 17-thousand-square-foot facility filled to the brim with wall to wall trampolines. It is a trampoline extravaganza!

The moment we arrived, we noticed all the smiles and pink cheeks adorning the faces of the patrons already enjoying their flying time. The kids (and adults) were really excited to get started. We chose the 60-minute open jump; jump times range from 30 minutes to 120 minutes, the jump times keep the flow of traffic on the trampolines free from traffic jams and excessive lines! 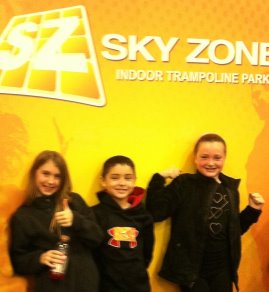 We did have to purchase special socks (regular socks and street shoes are not permitted), which cost $2 apiece, however, once you purchase them, you may bring them back on subsequent visits, not having to incur that cost again. The kids immediately threw on their socks (and when I say kids, I am including myself), and headed straight for the Main Court. Bouncing off the walls takes on a whole new meaning at Sky Zone, yes, even the walls are made out of trampolines.

To keep it safe, the trampolines are sectioned off and only one jumper is allowed per square (or rectangle). There are plenty of staff members on hand to make sure that the rules are followed, which I appreciated immensely. We began our jump. It was incredibly fun; we all felt like superheroes flying high and free.

After about 10 minutes of free jump, we needed a little break (talk about a workout!), so we headed to the table for some water (you are allowed to bring in water to the facility, but if you forget or want something besides water, they do have snacks and drinks available at the Sky Cafe). 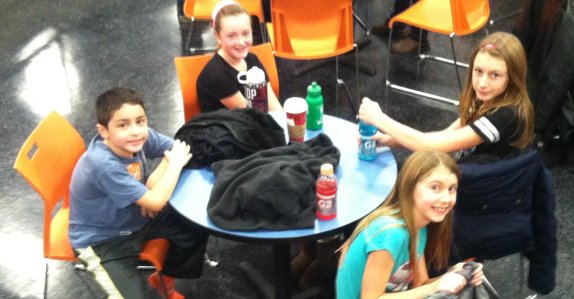 The next stop was the foam pit! Imagine bouncing off of a trampoline into a pit filled with foam blocks! It was thrilling even for the adults. The hard part was getting out of the pit, at least for me; the kids, of course, had a little less difficulty. However, that difficulty didn't stop me from spinning into the pit a few more times!

We continued our Sky Zone journey at the Sky Slam Basketball Dunk Courts, yes, it is just as it sounds and, in case you were wondering, it does make you feel like Michael Jordan (or insert your favorite NBA star here), my sister-in-law even made a basket on the highest hoop, the crowd cheered and her facial expression was priceless! 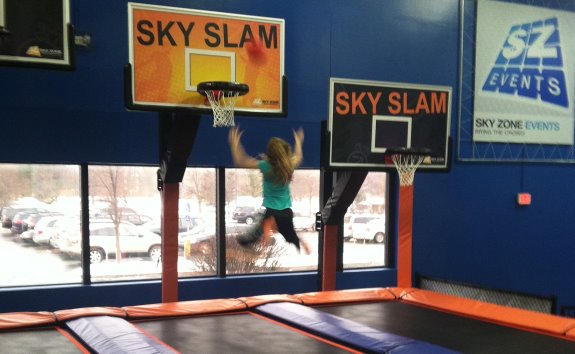 The kids also tried out the Ultimate Dodgeball Court. Dodgeball is much harder on trampolines, but my nephew said it was his favorite part! We finished up our experience at the Main Court, and when our hour was up, we were the smiling, pink-faced patrons!

Touted as a place that is fun for all ages (their motto is “if you can WALK, then you can FLY”), we found that to be very true. We had a blast and would definitely enjoy going there again. They also offer birthday party packages, which may be in our future!

Sky Zone is appropriate for ages 2 and up, as they have a special toddler jump time just for ages 5 and under. Toddlers are only permitted to jump in the designated TODDLER AREAS as well as rotate in queues for basketball and foam pit if permitted by their supervisor adult. For Open Jump times, I'd say ages 4 and up would be best.