Skyler’s Eyes | Kids Out and About Rochester 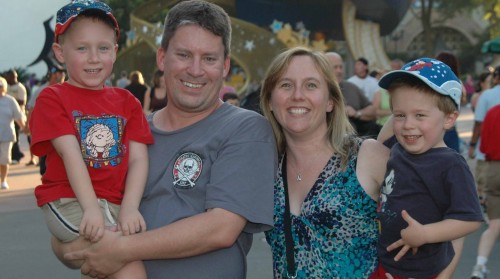 I wanted to name my firstborn child Skyler. Nickname, Sky. I had no idea how fitting this name would be until my baby boy’s eyes turned a shade of blue so light I have found its equal only in the midsummer sky.

I could lose myself in those eyes, if he would only give me the chance. His gaze does not rest on mine long enough to do so, though his eye contact has improved over the past year of his treatment. Skyler, my intelligent, affectionate, and imaginative four-year-old son, has autism.

Skyler’s eyes see the world differently from yours or mine. At our dinner table, in a state of food euphoria, he stares into space, smiling at some feast-for-the-eyes that is hidden from my view. He visits this alternate reality often, a realm I imagine is filled with his favorite cartoon characters. There, he can solve mysteries with Scooby, explore with Dora and, of course, drop in on Mickey whenever he wants. I ache to go there with him, to experience the wonders that lure him away from me, but guests are not allowed. The price of admission is autism. It is too high a price to pay.

As happy as he seems in his own little world, I am committed to pulling Skyler back into mine. I have seen the dramatic effects of his therapies—the way they have made the real world easier for him to bear. I will take advantage of these services until his actual life is as fulfilling as his imaginary one.

Looking back, I’m glad I trusted my instincts over the well-meaning reassurances of family and friends. “He’ll talk when he’s ready,” they said whenever I confided my worries about Skyler’s lack of speech. They thought I was overreacting, as first-time mothers are apt to do, and I hoped they were right. Still, I voiced my concerns to our pediatrician. She did not take them so lightly. Per her suggestion, I called Early Intervention for a free evaluation.

Skyler was a year and nine months old when the first of many therapists entered our home. I finally asked the dreaded question: “Could it be autism?”

“He’s so social,” one of the therapists said as Skyler charmed her with his blue eyes and infectious smile. “I wouldn’t worry about that.”

She and her colleague deemed him within “typical parameters” that day, but instead of accepting their positive review, I asked them to reconsider. I was nearly due with my second child, and Skyler’s silence was starting to frustrate him as much as it did me. I imagined his tantrums mingling with the ever-present cries of a newborn, and my survival instinct emboldened my request. The two women empathized, rechecked Skyler’s scores and approved him for one hour of speech therapy per week. I was relieved and grateful.

Over the next few months, I watched the magic show of Skyler’s speech therapy and marveled at his therapist’s skill. Wielding her craft like a wand, she summoned my son’s voice from where it had been locked within his core. She did this in the simplest of ways—through play. I studied her techniques and became my son’s private tutor, drilling him for hours each day. His progress was staggering. My worries began to slip away. Briefly.

Then we introduced Skyler to a daycare setting, two days per week, and his teacher’s concerns added ballast to my spirits. My son was not interacting with the other children in his classroom, and he wasn’t using the language he had worked so hard to acquire. Instead of playing on the playground, he walked laps around the perimeter. Something was wrong.

At our speech therapist’s suggestion, we scheduled another evaluation—this time at Kirch Developmental Services Center at Strong Memorial Hospital. Just 3 months shy of his third birthday, Skyler treated this appointment like a starring role. Not only did he talk to the developmental psychologists, he wouldn’t shut up! He provided a running commentary on what he was doing and seeing, but when it came to asking and answering questions, he was at a loss. Still, I was never more proud of my happy, inquisitive boy.

When I heard the diagnosis, I accepted it without tears. Skyler had Pervasive Developmental Disorder: Not Otherwise Specified (PDD-NOS), one of the five conditions referred to as Autism Spectrum Disorders. I knew this diagnosis did not change who my son was or how much joy he would continue to bring to my life. I considered myself lucky that Skyler’s autism seemed so mild. Confirming this opinion, the doctor used the term “high-functioning” and said we should pursue typical classroom settings for him in the future.

“How often do children with this diagnosis fall off the spectrum?” I asked.

“I don’t know of any studies that have published that statistic,” the doctor said. “But perhaps as many as twenty percent.”

That was all I needed to hear; my goal was set. If there were anything I could do to secure Skyler a spot amid that twenty percent of children who were no longer considered autistic, I would do it.

Monroe County has made it easy for my husband and me to pursue this objective, providing an unbelievable amount of support. You may need to pinch yourself after you hear just how much. I know I did.

Skyler’s diagnosis entitled him to an intensive level of special services, free of charge.

From that day forward, he has received 15 hours per week of special education, speech therapy, and occupational therapy—a treatment plan that could cost as much as $6,000 per month if not for the good fortune of where we live. I no longer complain about paying New York State taxes. That money is being put to good use improving the lives of children like Skyler.

My gratitude has led me to share our story. I especially want to reach other local families who suspect a developmental delay in their child. You have everything to gain by seeking help. Ask the hard questions of your pediatrician. Call Early Intervention for a free evaluation. Put aside any stigma you may associate with special services. Early diagnosis is the key to securing a brighter future for your child. That is all that matters.

Skyler is blissfully unaware of his difference. He adores his special teachers. Through their outstanding efforts, his speech and cognitive abilities are right where they should be for his age. He still struggles socially and has some sensory issues, but if you saw Skyler on the playground now, you wouldn’t know anything is amiss.

My son brings great joy to our world and derives immense pleasure from it. But he still visits his fantasyland from time to time. While he is there, I watch his body quiver with excitement. His smile beams. His blue eyes dance.

Oh, how I wish I could see through Skyler’s eyes.

Vicki Schultz is a volunteer fundraiser for the Rochester Walk Now for Autism Speaks, which will take place on Saturday, October 9, 2010 at Monroe Community College. Please visit www.walknowforautism.org/rochester for more details.

“Skyler’s Eyes” was previously published in Genesee Valley Parent Magazine in September 2008. A follow-up article on Skyler’s progress, entitled “Advocacy vs. Alienation,” is included in their September 2010 issue.

• Not speaking
• Not pointing or waving
• Seems to be deaf
• Repetitive motions or play
• Indifferent to others
• Oversensitive to light, sounds, tactile sensations
• Avoids eye contact
• Loses any language