Review of Rockabye Baby! Lullaby Renditions of The Smiths | Kids Out and About Rochester

Review of Rockabye Baby! Lullaby Renditions of The Smiths

There was probably a time in your life when it was just you. You, with a fistful of ideas, ready to take on the world. You, with a backpack and banjo, ready to hit the road. You, free as the wind with nothing to tie you down and no one asking you to make them chocolate milk every five minutes. If I sit very still, in a quiet place, I can remember those times. I am lucky enough to have kept a few things from back then: a few friendships, a few good ideas, and several good CD's that comprised the soundtrack of my life. One of the highlights of that music collection was anything, anything at all by The Smiths. When I was 20, no other music group spoke to me the way The Smiths did. They coupled an upbeat, jangly guitar with this dead-where-you-stand sarcasm, all the while capturing both the wild abandon and total bewilderment of being young. As an added bonus, they weren't mainstream, so they made me feel smarter than everyone else. I was in on the joke. Hang the DJ indeed! I loved the Smiths. I listened to them every day.

Flash forward a couple of decades.

I am still packing The Smiths for the ride, but now I am driving a minivan. And I have the fruits of my three frenetic trips to the labor and delivery unit strapped in car seats in the back. They are 5, 4, and 2. They are hungry, tired, and dirty, and also really, really loud. (Rather like the way I used to play The Smiths, just a lot lighter on harmony.) If my kids had their way, there would be a disco ball hanging in the back of our van; the faster the beat, the more they like it. And while I appreciate a good piece of pop confection as much any suburban mother of four, sometimes we need to bring it down. Way down.

Time for The Smiths

So be soothed, my little beasts! It’s time to pop in the Smiths. Yes, the Smiths. But not my Smiths. Instead, I pop in my new Smiths album—for my kids! Yes! It’s Rockabye Baby: Lullaby Renditions of the Smiths! This album is a compilation of all my favorite Smiths songs, but transformed into quiet instrumentals that have the soothing sounds of bells and mellotrons. It comes wrapped up in a hip little CD case with a cover that mimics a Smiths album—but instead of pictures of Morrisey or some other disaffected youth, there are teddy bears. And inside, along with the credits, a recipe for baby food!

Did I think it was weird at first? Yes, yes I did. It was a little disconcerting to hear the music that I know so well drifting toward me in that format, relieved of all its drollness and angst. But the interesting thing about The Smiths music is that the words and the chords often do not match. That is to say: In traditional Smiths lyrics, sometimes they are singing about getting hit by a double decker bus while playing beautiful, soaring chords, so the listener feels oddly uplifted while contemplating the bus accident. 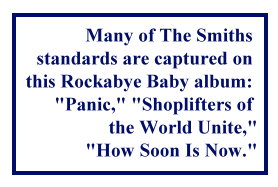 The incongruity of the lyrics and the melody gave many songs a wry charm and made others quite amusing, but for me it was the melody that kept me coming back all these years. Many of The Smiths standards are captured on this Rockabye Baby album: "Panic," "Shoplifters of the World Unite," and "How Soon Is Now." A Smiths fan knows these songs well. Any one of them could've served as an anthem for the many geeked-out, artsy nerds heading toward college 20 years ago. Vintage though they may now be, it still makes me happy to hear them. By the time we get to track four ("There is a Light that Never Goes Out"), the kids start to settle down. They are, indeed, soothed.

"What are the words?" my middle son asked one day, as we listened to the final song on the CD. "Oh," I replied, nonchalantly, "There is a man singing "Please please please, let me get what I want....Lord knows this would be the first time...." My son just smiled at me. That's right, buddy, it's your theme song. Should the day arrive when my kids grow tired of the Smiths (as if!), there is a whole library of Rockabye Baby Lullabyes from which I can choose… for them and for me. The artists covered run the gamut, from the Police to Bob Marley to Bjork to The Rolling Stones to Weezer. Yes, hipster Moms! Even Weezer! Now, what do I get out of it, as I Rockabye to the Stop and Shop? There are days I would rather just listen to my Smiths, of course. But life, especially motherhood, is compromise. After all, the melody is still there. A few hours later I will likely find myself humming a tune, a tune from that soundtrack. The soundtrack of my life, still.