Review of Billy Elliot The Musical | Kids Out and About Rochester

Review of Billy Elliot The Musical 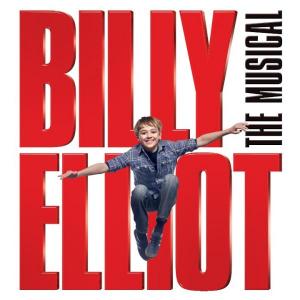 Review of performance November 30, 2011
Auditorium Theatre
Rochester, NY If you think Billy Elliot The Musical (playing through Sunday, December 11 at the Auditorium Theatre in Rochester, NY) may not at first appear to be a kid-friendly musical because it has not been specifically marketed to kids, you should give it a second thought.

After all, the show centers around a pre-teen boy, with plenty of peers in the cast. It is a highly engaging, entertaining show, which will hold your kids in (almost) rapt attention.

Set in a coal-town in Northern England in 1984, Billy Elliott tells the story of an 11-year-old boy and family who struggle to deal with the threatened closure of the coal mines. Riot police, internal union struggles, and the loss of the family’s livelihood set the background for his discovery that he loves ballet. (Pronounced “bally” in Northern England.) While his at-first-unsupportive family struggles with whether to support his dream of auditioning for the Royal Ballet School, Billy has to decide whether to pursue his dreams or stay in his dying town. 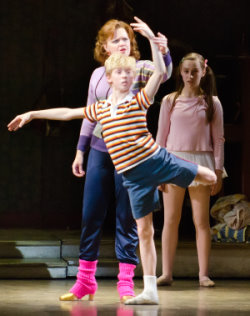 Children younger than 10 may have a hard time absorbing all of the historical background and the issues which affect Billy’s life. But they will no doubt be entranced by the marvelous dancing. There are plenty of upbeat, up-tempo numbers to draw kids into the show. The cast is full of funny kids and funny adults, and of course, everyone can dance.

Two things that parents should be aware of before they decide whether or not to take their children:

1) There is plenty of salty language, and a fair amount of profanity. However, if you are not uncomfortable with your children hearing expletives, you should not miss this show.

2) Also, if homosexuality is on your kids' radar, be prepared to discuss it on the way home; while there is nothing overt, Billy's family does subscribe to certain stereotypes about male ballet dancers, and Billy's friend Michael likes to dress in women's clothing. It is actually very funny, in a "La Cage Aux Folles" sort of way.

The young actors whom we saw portray Billy (Ty Forhan) and his friend, Michael (Jacob Zelonky), were so amazing they had the entire audience leaping to its feet before the show was even done.

Even in an arts-centered city like Rochester, it is a rare thing to see children so young with this much talent. Their dancing would be remarkable for someone twice their age. The girls from the ballet school were so much fun to watch and also incredibly talented. And in the second act, Billy does something so spectacular I can’t spoil the surprise. You’ll just have to go see it for yourself.

Billy Elliot The Musical is at the Auditorium Theatre in Rochester, NY from November 29 through December 11, 2011. Tickets are $37.50 through $67.50. Click here for more information.