Pippi Longstocking: A Family Musical | Kids Out and About Rochester 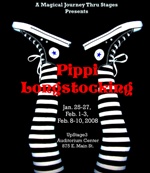 A review "Pippi Longstocking" from Magical Journey Thru Stages

At the Auditorium Center's Upstage3 Theatre
Through February 10, 2008
Rochester, NY

A slight change of pace for Rochester's terrific Stages performers brings us Pippi Longstocking, an original new musical from Rochester's own Cara D'Emanuele. My family went to see the sold-out performance on January 26, and came out delighted.

Stages typically presents Broadway-revue style performances, which I have reviewed in the past, and the performers are usually the cream of the crop of Rochester's high school and college students with a few very talented middle-schoolers. The shows are oriented toward a middle-school-to-adult crowd (though typically fun for the whole family). This show not only caters to a younger audience, but features younger performers -- age 7 through 16. I was told that this is the first performing opportunity of this level for several of the performers, but that in no way would have been apparent from watching the show. The cast of 30 young ladies from around Rochester gave a polished performance that is worthy of Stages' reputation.

You know how you bring your early-elementary age kids to a typical musical theater performance and throughout the show, you must constantly field whispered, "What just happened?" questions? That's one great thing about this performance: It's really easy to follow. My 6-year-old, Ella, kept turning to me with an excited thumbs-up and a big grin. She literally was bouncing in her seat at times.

What struck me most was the set design; it's probably the best I've ever seen on a small stage for a young person's performance: Everything from the set props to the costumes is in black-and-white, although it's a beautifully varied black-and-white--except for Pippi's hair, which is of course bright red. Not knowing much about how these things work, I wondered whether this terrific set was standard for this production of Pippi.

And then I found out afterward that nothing is standard for this production of Pippi! Everything is original, because this is an original production, from the set to the dialogue to the songs to the music to the choreography. Yes, it's all done by Cara D'Emanuele, for this production. Turns out that Cara had proposed Pippi Longstocking to Stages without realizing that the version she had directed for RAPA about 5 years ago was no longer available in the United States. "The show was announced and we were ready to cast, but found ourselves without a script and score," Cara told me. So, as Cara is not the kind of director to pull out of a project or change the announcement of a show, she wrote her own adaptation. The plot is loosely based on Astrid Lindgren's first book, Pippi Longstocking. You would never think that this was something turned out in a short amount of time, especially the songs, which are of the caliber we have come to expect from the best of musical theater aimed at kids. Bravo to Cara for terrific work under what must have been no small pressure.

Admirers of the Lindgren story will see a somewhat softened plot. The policemen are gentle - a silly and lovable version of Lucy and Ethel. The thieves are another duo who are almost endeared by Pippi. The biggest
difference is Mrs. Prysselius, The Director of
The Social Welfare Office; in this version, Pippi's influence generates some soul-searching, and Mrs. Prysselius -- in one of those you're-not-sure-quite-how-it-happened character developments that you often see in musicals -- becomes someone who wants to make a positive difference in the community instead of being a busybody.

The performances we saw, particularly from Lea Polizzi as Pippi, Rhiannon Crawford as Mrs. Prysselius, Brooklynn Ruggieri as the Schoolmistress, and Megan McNiffe and Alina Fowler as the two goofy crooks, were smooth, polished, and enjoyable. Lea's performance gave me the sense that she was Pippi in real life, so well had she integrated the lift of the chin, the cock of the head, the cheerful but puzzled lilt to the voice. The stars of the show change each weekend for the three weekends that the show runs. February 1-3, Pippi is played by Alana Silber, February 7-10, Pippi is Julie Shapiro, and many of the other main characters switch as well. I can only imagine how complicated that made rehearsing!

I read Pippi Longstocking as a child, and I remember never really being able to get the point of Pippi. What was the message? It was difficult to tell. Despite Cara's efforts to make the end have some meaning, Pippi as a person still leaves me kind of empty. But it's a very fun empty, and that's fine. What's more, it's not grindingly empty as are some of the contemporary pop culture things to which kids are exposed; you needn't worry at all about what your kids are learning when you take them to this production. It's good, clean, fun that engages kids' imaginations and lets them live out the fantasy of future independence in a healthful way. And, most important of all, my kids (girls, ages 6 and 8) loved this production. They talked about it the whole way home. They have referred to it all week. They talk about what it would mean to be Pippi, and they want to read the book.

They want to read the book. What more could a parent ask for from Saturday night family entertainment?