Page 3, Review of Almanzo Wilder Homestead & Malone, NY | Kids Out and About Rochester

by Debra Ross Part of KidsOutAndAbout.com's series on budget-friendly family vacations (Click here to return to Page 2, where to stay and eat in Malone) 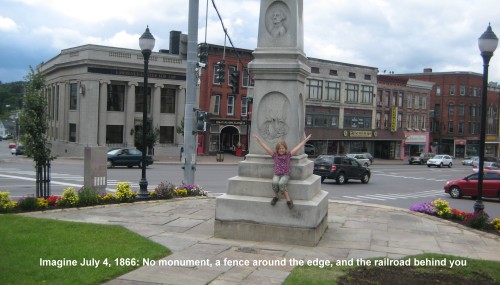 Malone, NY: It's holding up

For a town whose heyday was in the late 19th century, Malone is holding up pretty well. There is a fair amount of commerce, even on a sweltering Friday afternoon in late summer. It feels safe, and decently cared-for, which is a lot better than one can often say about some towns whose time has come and gone. 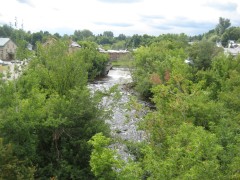 But a visitor who comes to the area primarily for the Almanzo Wilder Homestead gets the distinct sense that the town could do so much more than it does to capitalize on this wonderful resource, and to augment the experience of its history.

The city is on the Salmon River (not to be confused with Almanzo's Trout River). The remains of an original 1840s-built mill still stand in the center of downtown, though it's crumbling. Square-fronted buildings from the 1880s line Main Street. There is one fairly helpful map just by the bridge over the river with some information about the town's past as an agricultural and logging center.

But it's as though the town has chosen to ignore the whole Laura/Almanzo phenomenon and the connection it could be making with visitors who come to learn about the history. We had to hunt and use a lot of inference and logic to be certain that the triangular Memorial Park on Main Street, right across from the old abandoned Flanagan Hotel, was indeed where the town had their Fourth of July celebration described in Farmer Boy. After an hour of hunting, we found some stone remnants of the railroad abutments -- but even though the railroad played a role in Wilder's book and was integral to the flourishing of the town in the mid-to-late 19th century, there was no information about it in the town documentation or even much in this online walking tour of Malone.

How about some friendly historical markers showing "Almanzo did this here," folks? They would go a long way toward helping us LIW-lovers make the most of our trip to Malone.

A few arrows pointing us to the "Wilder plot" would also have been useful for our visit to Morningside Cemetery, where Almanzo's grandparents and uncle are buried. There was nothing to direct us, so our first counterclockwise trip around the cemetery was unproductive, but on the second trip we found it. (Tip: If the entrance is at 6 o'clock, the Wilder plot is on an offshoot path about 10 o'clock.) 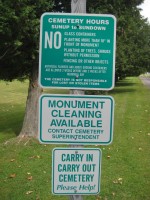 I can't also help but post this sign that greets you as you drive in to the cemetery. It's a Carry-In-Carry-Out Cemetery!?! The amusement the grownups in our party derived from this gave us the momentum to circle around twice to find the Wilders. Oh, and the cemetery is also the final resting place of William Wheeler, U.S. Vice President under Rutherford B. Hayes.

A final recommendation: If the doors of the First Congregational Church of Malone are open, slip inside and see the beautiful interior. Built in the 1880s, this romanesque church replaced an earlier structure from the same congregation, and at least some of Wilder's relatives had been members. This congregation had been emphatic abolitionists, and tunnels in the basement that still exist were reportedly used to hide fugitive slaves in the Underground Railroad. We met the Reverend Howard Cain, who graciously showed us some of the beauty of the church's interior (including beautiful cherry wood and gorgeous stained glass) and the pew where William Wheeler had sat.

I was excited to see that there was a Franklin County Historical Society, because I was hoping that they would fill in many of my gaps about Malone and its place in upstate New York and westward-expansion history. I was hoping for maps, artifacts, and knowledgeable people. Unfortunately, it seems only to be open on Tuesdays and Thursdays. We were there on Friday and Saturday. Sigh.

The Almanzo Wilder Homestead was mildly disappointing, but still worthwhile. The town of Malone was mildly frustrating, and is probably a lot more interesting than we were able to discover. But we found great food, some nice people, and had a good time.