KidsOutAndAbout Reviews WallByrd Theatre’s THE TAMING OF THE SHREW 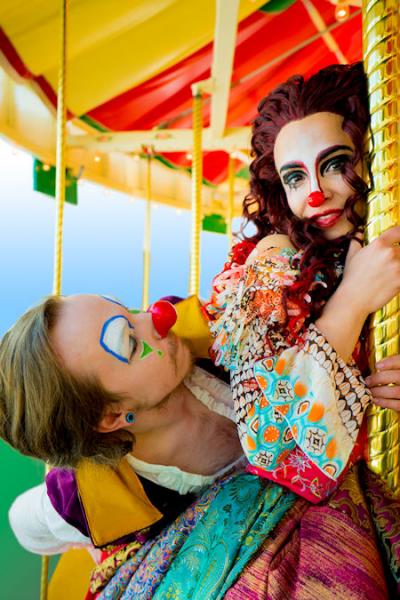 If you've wanted to introduce your kids to classical theatre, WallByrd Theatre Co.'s production of The Taming of the Shrew is an ideal choice. The rollicking fun of this comedy will give them a taste of Shakespeare, while showing that his work can be fun as well as important.

As you walk into the theatre, a juggler is clowning around onstage, drawing the audience in (quite literally!) and setting the stage for laughter. Young theatre goers will love the fact that this production has been "updated," with contemporary music and actors using cell phones, and taking selfies.  They'll also enjoy the fact that the fourth wall virtually disappears with actors and audience floating back and forth between stage and seats.

For those unfamiliar with the plot: Charming Bianca Minola (Emily Putnam) has many suitors, but alas, her steadfast mother (Judy McCaffrey) declares Bianca cannot wed until after her elder sister Katherina marries. The problem is that the fiery Katherina (Fiona Criddle) is known far and wide not only for her sharp tongue, but also for wielding her nasty temper. Hilarity follows when characters begin switching names and taking on new professions and identities in order to gain access to the fair and fairy-esque Bianca, endeavoring to win her heart.

Meanwhile, Petruccio (played with bravado by Ged Owen) is easily persuaded to marry the cantankerous Katherina with the promise of family riches.

This is a rather ingenious production filled with talented cast members who incorporate circus arts, mime, physical comedy and even a food fight to convey plot. So, although this production is spoken in Shakespearean English, there is no doubt about what is happening onstage. Some cast members, such as Jonathon Lowery as Hortensio and Cassie Buscemi as Grumio, are so adept at physical comedy that you await their next entrance in anticipation of the opportunity to laugh.The night I attended, there were no youths in the audience, but I could imagine the slapstick comedy woven throughout would be a big hit with many. 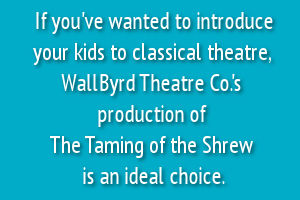 This is a lively production with a creative set, vivid costuming, spectacular wigs, and authentic clown makeup, which is used to create a circus atmosphere. Free bags of popcorn, offered when you enter, add to the fun and circus ambience.

While bold liberties are taken in this vibrant production, WallByrd Theatre Company'sThe Taming of the Shrew is Shakespearean comedy at its most creative, with physical humor, plot twists, mistaken identities, and a happy ending. Although fun and fascinating, it may not be for every child. The Elizabethan English and 2 1/2 hour running time may make it unsuitable for some younger children, but for those around 12 or older, this is the perfect introduction to Shakespeare.

WallByrd Theatre Company’s production of Taming of the Shrew takes place at the Lyric Theatre, located at 440 East Avenue (use the side entrance on Prince Street, off East Avenue).  The show runs Thursday through Saturday, April 4-7, 2018 and April12-14 at 8 pm, and Sunday April 8 and 15 at 3 pm. General Admission ticket price is $22, and can be purchased online or at the door.