The Enchantment of Masks: A review of Aladdin from Philadelphia's Enchantment Theater Company | Kids Out and About Rochester

The Enchantment of Masks: A review of Aladdin from Philadelphia's Enchantment Theater Company 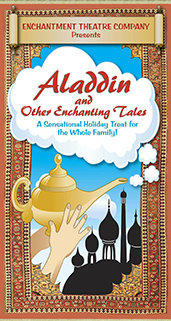 Philadelphia’s Enchantment Theater Company specializes, as its name suggests, in creating magical, transporting stories on stage for young audiences. Its most recent production, “Aladdin and other Enchanting Tales” recently made a stop in Rochester at the Nazareth College Arts Center, and spun an hour-long series of stories that featured plenty of magic to go around, along with creatures, colors, costumes, and some actual magic tricks.

Enchantment primarily tells its stories through pantomime movement, musical accompaniment, and a small amount of narration. This helps create the hushed, wondrous vibe of the show, but it also might mean that younger children in the audience - especially pre-school or primary graders - find the stories hard to follow without a parent stepping in to “translate” the movement. The images on stage are fantastic, though, made especially memorable by the masks worn by all the actors. They’re full-face, “Greek”-style - picture a frozen human face - and focus the attention on the characters’ movements as they whirl and twirl their way around the stage

The “Aladdin” show is an abbreviation of the classic 1,001 Nights, in which the maiden Scheherezade attempts to rescue her brother from the Sultan, who has condemned him to death in the morning. Each night, Scheherezade spins a new tale for the Sultan, casting him as the hero. When the story ends, the Sultan begs for more and postpones the execution, until, eventually - spoiler alert - he frees the brother. This show featured four of her stories. The two which drew the biggest reaction from the crowd were Sinbad and Aladdin, and with a sea monster and a cyclops, the Sinbad story was the biggest hit. A flashback scene featuring the Sultan making a heartbreaking decision to abandon his best friend was moving, and added some nice emotion to the show.

As mentioned earlier, parents are wise to consider the age suggestions, since the show definitely features some creatures bound to leave an impression on the younger set. Some of the less energetic moments in the show could possibly move a bit too slowly for some children as well. But for those school-age children wowed by the hypnotic mix of color, dance, and music, or at least in love with monsters, this production was enchanting, indeed.

Glenn McCarty is a writer and father of two in Rochester, NY.