Comedius Maximus: KidsOutAndAbout reviews Geva's A Funny Thing Happened on the Way to the Forum | Kids Out and About Rochester

Comedius Maximus: KidsOutAndAbout reviews Geva's A Funny Thing Happened on the Way to the Forum

Sometimes theater speaks to the soul, commanding the audience to examine its already set notions of philosophy, love and even justice. Theater can be deep. It can be demanding. It can be troubling. And sometimes theater throws all of that out the window in favor of scantily-clad girls, goofy slapstick, jokey songs, and bawdy humor. Cheery, tuneful, and packed with gags, A Funny Thing Happened on the Way to the Forum offers nothing less than a night filled with rollicking fun and non-stop laughs. Are you not entertained? 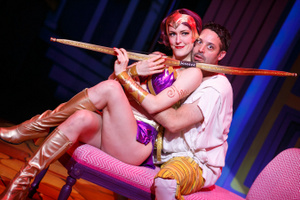 To win his freedom, Roman slave Pseudolus promises to unite his naïve young master with the virginal courtesan who lives next door. Unfortunately, the girl has been promised to a sea captain, and the wily Pseudolus is forced to manipulate seemingly every person in Rome – including his own owners, a buyer and seller of beautiful women, a fellow slave, an elderly neighbor searching for his missing children, a bevy of comely girls for hire, and a trio of hapless Roman soldiers – before the captain returns to claim his prize. The resulting jumble of love potions, mistaken identities, and misplaced lust leads gleefully to all-out chaos.

Forum is a classic three-door farce whose blend of ancient Roman comedy and vaudeville-style jokes was already retro when the show debuted in 1962. Book writers Burt Shevelove and Larry Gelbart (he went on to create a little TV show called M*A*S*H) and songwriter Stephen Sondheim (his Broadway legend already on the rise thanks to his work on West Side Story and Gypsy) wanted to prove that what was funny in 200 B.C. and 1910 was funny, period, and they were rewarded with a Best Musical Tony and massive box office receipts. The show has never really gone out of style.

Melissa Rain Anderson directs Forum on Geva’s Wilson Stage with cirque-esque staging complete with hula-hoops, juggling and tumbling by the multi-talented Proteans (Kenneth Ziegler, Joshua Dean and Ben Franklin) and high-flying aerial acrobatics provided by the fearless Lani Corson. Pittsford native Steve Rosen looks to Forum forebears Phil Silvers and Zero Mostel to imbue his Pseudolus with busloads of schlubby charm, and Mark Bedard (playing the high-strung slave Hysterium) steals the show with a drawn-out and hysterically funny mime of his own botched suicide. As the young lovers, Rob Riordan shines as the new-to-romance Hero and Anna Bucci is blissful as the lovely but impossibly dim virgin courtesan Philia. It’s a wonderful cast all around, and Adam Koch’s colorful and clever set is worth the price of a ticket by itself. 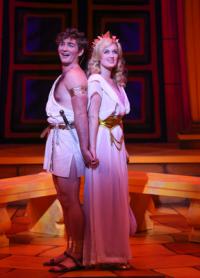 There’s a great moment in Act I when Pseudolus drags Hysterium, henpecked master of the house Senex (a very funny James Michael Reilly) and girl-wrangler Marcus Lycus (Bill Nolte, killing it in a pimped-out purple toga) into a rousing number called “Everybody Ought to Have a Maid” – with no one besides Pseudolus understanding in the slightest what they’re singing about. It’s Sondheim being Sondheim, playing with words and building around a simple idea - that the girl Senex hungers for is really just there to clean the house and is not, in fact, the courtesan Hero worships and Marcus Lycus is trying to sell. Another highlight comes later, when Philia sings about how she’ll show the Captain what’s what by kissing him all the time and holding him extra-tight – all while secretly thinking of her beloved Hero.

Geva Theatre has a lot to celebrate this year: The renovations are finally done and the place looks fantastic with a new lobby, bar, and cafe. A Funny Thing Happened on the Way to the Forum kicks off the theater’s 44th season in high style. It’s a show crammed with smiles and good vibes. Worry tomorrow. Go see a comedy tonight.

A Funny Thing Happened on the Way to the Forum is naughty, but it’s a very broad and innocent sort of raunch. Kids over 12 should love it.

A Funny Thing Happened on the Way to the Forum is running through November 6 at Geva Theatre Center. Tickets are $25 to $69; click here to purchase. Call (585) 232-Geva (4382) or visit gevatheatre.org for directions and more information. Running Time is 2 hours, 20 minutes including intermission.