Review of "The Best Christmas Pageant Ever" at Theatre of Youth

You can't judge a book by its cover.

The Best Christmas Pageant Ever was written by Barbara Robinson and based on her book of the same name. Relying upon the strong performances of its youth-filled cast, Theatre of Youth inm Buffalo brings audience members of all ages behind the scenes of a Christmas Pageant where we are reminded to be more generous, not with our wallets, but with our hearts. 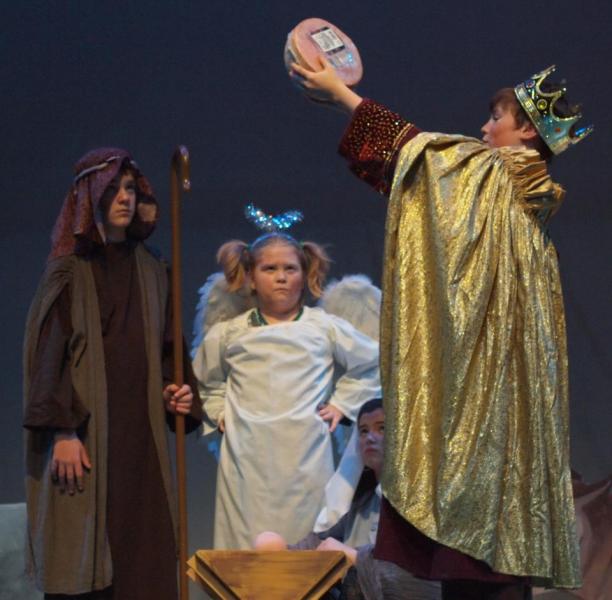 "The Best Christmas Pageant Ever" is the story of a typical played-out Christmas pageant turned on its ear. The usual director of the pageant, Mrs. Armstrong, is sidelined by a broken leg and won't be able to take charge of this year's show. As a last resort, naive mom Grace Bradley agrees to take on the responsibility, not knowing that her inexperience as Pageant Director will end up being the hinge upon which the entire story is centered. Without her, the Herdman children--scourge of the local school--would never have been given the chance to take part in the pageant. Without the lure of delicious snacks, the welfare-dependant Herdman kids would never have volunteered in the first place. The result is more than heartwarming; it is inspirational.

I've said it before and I'll say it again, the folks at Theatre of Youth are masters of the “less is more” principle! The most elaborate staging takes place in the Bradley home, and it is the  Christmas Tree. When the stage lights go down and the Christmas Tree is lit, the audience feels the magic of Christmas. As the Christmas tree lit up the stage, my 5-year-old turned to me and said, "I already LOVE this play!"

This play relies almost completely on the actors to set the stage and they are all marvelous.

Mary McMahon does a great job of portraying Grace Badley. Most adults in the audience identify with Grace; we understand her trepidation, fears, and stereotyping, and we also recognize her shortcomings as our own.

Bob Bradley (Grace's husband) is subtly and steadfastly played by Robert Insana.  Bob does his best to avoid going to the pageant, but not only ends up supporting his wife, but also provides the perspective which draws the parallels between the ragged, poor and friendless Herdmans and the Holy Family.  Insana doesn't have a huge role, but he is the one who quietly connects the dots.

I know I wasn't the only parent in the theatre who (unfortunately) recognized herself in the other adult characters as well.  Bossy Mrs. Armstrong, played perfectly by Joyce Caryolyn, managed to have a gigantic personality even from the confines of a hospital gurney.  Jennifer Fitzery, as Mrs. McCarthy, was the embodiment of a busy-body: judgmental, but only for the "good" of everyone around her! The other member of the "mothers 411," Mrs. Slocum, was charmingly portrayed by Annette Daniels Taylor.  Mrs. Slocum is the mom who gets sucked in by the drama and caught up in its momentum. Daniels Taylor does a great job of being the victim of "good" intentions.

But enough about the adults! The stars of the show, the ones we were all really intently watching, were the kids.

The Bradley children, Beth and Charlie, were played by 7th graders Corinne McLoughlin and Eric Marsch. McLoughlin has the additional pressure of being the Narrator for the show, but she gave a confident, steadfast performance that personified the consciences of the kids in the audience.

As adults followed along the path of Grace Bradley, the kids followed in Beth Bradley's footsteps. Marsch played a character my son instantly recognized: the kid being compelled to be a part of something he'd really rather avoid. While my own son has never had to wear his Dad's bathrobe in a church play, he's got his own examples of Mom-induced mortification and felt a sense of comeraderie with Marsch's character.

Lydia Sulaiman, who plays Alice, is fantastic. Alice is a snarkey, tattle-taling, know-it-all, poor sport, and my kids loved despising her. Sulaiman must be thinking of someone from her real life to be able to portray this character as so unflinchingly awful.

The kids who play the roles of the Herdmans are a solid unit of dysfunction. We don't have the opportunity to get to know the boys very well, but they act as a cohesive and supportive part of the family. It is through these characters that we understand most clearly just how poor the family is. They are survivors, and they depend upon each other to navigate through life.

The shining moment for the Herdman Boys occurs when they take something from their welfare basket that they could really use themselves and present it to the baby "Jesus" during the Pageant. I wasn't the only one laughing and crying at the same time!

The Herdman girls, Imogene and Gladys, are played by Justine Rodriguez and Kara Okonczak. They are the bookends in the family, but manage to be on the same page when it comes to the Christmas Story. Focusing on the practicalities, they are both disgusted that the Innkeeper made the pregnant Mary sleep in the barn, that the Three Kings didn't bring anything useful to the new baby, Jesus, and that they relied upon a star to find the way.  The don't seem to care that the baby is Jesus; their sense of injustice is for a regular family who continues to get the short end of the stick.  While the rest of the children in the pageant are disturbed that Jesus had to sleep in a feed trough, the Herdmans take this is stride as they remember Gladys sleeping in a dresser drawer as a baby.

Okonczak enthusiastically plays the larger-than-life Gladys who takes on the role of "Angel of the Lord" in the pageant. Streaking around the stage yelling "Shazaam" and imagining she is part of a comic-book sort of event, Gladys feels like she should be an avenging angel against Herod in "Revenge of Nazareth" and is more than a little disgruntled when she discovers her only line in the pageant is, "And unto you a child is born." My daughters cheered for Okonczak and understood where she was coming from. The Christmas story would be much different if the Angel of the Lord really had gone after Herod and the guys who made poor Mary sleep in the barn!

Out of everybody on the stage, my kids and I agree that the most amazing performance came from Justine Rodriquez. Volunteering to play Mary, Imogene Herdman doesn't even know who Mary is or what the Christmas Story is about. We watch Rodriguez very quietly transform Imogene Herdman--a bold, skeptical, jaded girl--into Mary. As she learns about the story, and asks Grace Bradley questions, Imogene Herdman begins to "get" it.

Unsettled that Imogene was holding the doll "Jesus" upside down by one of his little feet, Grace Bradley asks her to just for one minute, pretend that it's a real baby. Audience members actually see something change on Rodriquez's face as all of a sudden Imogene completely relates to Mary and her dire situation. Unfettered by the idea that the baby is Holy, Imogene treats the doll like a real baby with real issues: She wraps him in a blanket, pats him on the back and is terribly loving. She also has a very emotional moment when it all becomes too much for her and she weeps quietly while holding her little doll.

As you might imagine, the Christmas Pageant really is the Best Ever, and I think all of us in the audience left the theatre vowing to be better human beings. Yes, I cried along with Imogene and so did my girls - but in a very good way.

My 14-year-old son did not cry. But on the way home he did say, "Wow. That was really powerful. Can we go back next weekend?"

The Best Christmas Pageant Ever is an all-ages show.  With that in mind, the run time is just over an hour, and there is no intermission. This is great for the youngest audience members, but it also means that there are no snacks or drinks available either. It would be a good idea to visit the rest room first so that you don't miss a single moment of the show.

The post-show behind the scenes Q and A session with members of the cast and Theatre of Youth’s Artistic Director, Meg Quinn, is also offered. This is a great opportunity for families to find out about the preparation, process and tricks developed to pull off a staged show. This is a feature of Theatre of Youth’s productions that I applaud and admire. So many times when we, or our children, think of the theatre we only think about the actors or directors. Perhaps we remember musicians occasionally as well. This demonstration allows the kids who love shows, but don’t love the idea of being an actor, to see all the various professions integral to creating the magic of theatre!  Genius!

The Best Christmas Pageant Ever is at Theatre of Youth in Buffalo on Friday - Sunday through December 16, 2012.

Helena Robin ...is President and CEO of the Robin family. She coordinates and executes all family operations including (but not limited to) communications, transportation, management, catering, maintenance, troubleshooting, and cultural development. Her Executive Team comprises a Husband/Creator of Chaos and three unpaid interns.