Review of Seneca Park Zoo's A Step Into Africa

Rachel Baker August wants you out of Rochester.

Okay, Ms. Baker August, the executive director of the Seneca Park Zoo, doesn't truly want you to get out of Rochester. But she does want you to Step into Africa: The Zoo has worked for the past six years to develop the Zoo’s latest exhibit A Step into Africa, to transport visitors to a unique African experience. The exhibit simulates an African Safari into the NguroNguro crater, one of the first African conservation areas set aside for people and animals to live together.

As you Step Into Africa, the first thing you see is a sweeping view of the landscape below. It is as if you are standing on the edge of the crater and looking out over the African landscape.

Details you may not readily notice help to complete the feeling that you are no longer in Rochester, but in the NguroNguro crater. The path resembles baked earth; the fences are like those that the indigenous Masai might build.

Ms. Baker August’s goal is that a visit to the zoo have hands-on fun, like a visit to Strong Museum and be as educational as a visit to RMSC, all while still getting to see animals in habitats which closely resemble their natural ones. A Step Into Africa meets this goal better than you might expect for something created for a Rochester climate: The archaeological dig area allows little kids to simply play in the sand, but kids up to middle school age can also learn a little about what it takes to be an archeologist; different fossils are hidden beneath the sand for kids to find and the wall surrounding the area has striations to mark the passage of time along with likely fossils embedded in the wall. 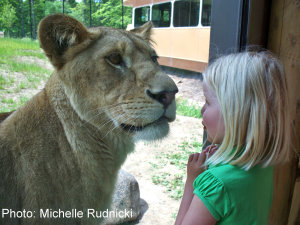 The centerpiece of the exhibit is the lion enclosure. Three young lions, one male and two female, live on a grassy slope in the middle of the exhibit. The lions can often be seen sitting atop the large boulder in the middle of the enclosure, surveying their kingdom like Mufasa himself. On one side of the enclosure, a safari bus acts as part of the barrier between the animals and visitors. Tracks in the mud let you know your tour bus is stuck; lions circle, and sometimes jump on the hood of the bus. You can hear the sounds of the surrounding area. How will the bus get unstuck? How will you escape the lions?

A simulated Masai village in the A Step Into Africa exhibit includes goats and a Masai hut. We learned that a 13-year-old Masai boy must kill a lion with a spear to prove his manhood! We looked at my 13-year-old boy and told him he better get going on that, he’s only got two months left until he turns 14. He declined.

Each day, the zookeepers do various things to enrich the lions’ lives. One day, it might be putting fresh meat out for them to “hunt”. The keepers try to put it close to the fence so that visitors can get really up close with the lions. When we visited, they were happily chewing mere inches from the fence; we were separated by only a few feet.

One aspect of the Seneca Park Zoo layout that sets it apart from larger zoos is this feeling of being so close to the animals. Most of the newer enclosures have been designed this way and the keepers do various things to encourage the animals to feel comfortable coming close to the front of the exhibit and being near people. The animals always have a choice, however; they are always able to retreat to their dens away from everything else.

A Step Into Africa is the crowning jewel of the Seneca Park Zoo. If the Rocky Coasts exhibit was the turning point in modernizing this Fredrick-Law-Olmstead-designed park, Africa is its fruition.

Here are some tips for a great day at the Seneca Park Zoo:

June Santini is vice president of operations at KOA. She has four exasperatingly wonderful children and a brand new granddaughter. She lives in Honeoye Falls, NY with her husband Steve and three of the four kids. She is a better cook than you are.