Geva serves up some American-pie-perfect-family entertainment with Pump Boys and Dinettes!

I came into the Pump Boys and Dinettes experience as a skeptic. It's really not the play's fault; Pump Boys and Dinettes was released on Broadway in 1982, and ran for 577 performances. I grew up in the New York metropolitan area, and I'm pretty sure that I saw the TV commercial for the show far more than 577 times. The commercial was a 15-second spot that pretty much went like this:

Fast-forward 30 years, and Geva Theatre Center produces Pump Boys and Dinettes here in Rochester. I woosh back into my 13-year-old skin and reflect briefly that it's probably not something that would interest my kids. But I decide I should go anyway--it's, you know, my job, and I've gotten to a time in life where I realize everything is interesting. Then when people I trust who have already seen the show urge me to bring my 12- and 14-year-old daughters, I do so, first regaling them with the boring story of the 1982 commercial that I have tried in vain to find on YouTube.

It's not the first time I've been happy that Geva has proven me wrong to be skeptical. Is it actually a show about nothing? Well, yes, in fact, that impression was sort of right.

The show is set--when? in the early '80s, I guess, but aside from the Dolly Parton joke it could be set anywhere in the 60-year span from 1930 through 1990. The show is less a story than a musical sketch, a uniquely American painting of a slice of life we don't normally experience here in the Northeast. The time is not nearly as important as the place: North Carolina, at diner and gas station on a stretch of Highway 57, located between the towns of Smyrna and Frog Level (which in real life are not on Highway 57).

As usual, Geva's window to another world is rendered with a stellar cast of performers and a gorgeous set where no detail is too small to be perfectly polished. 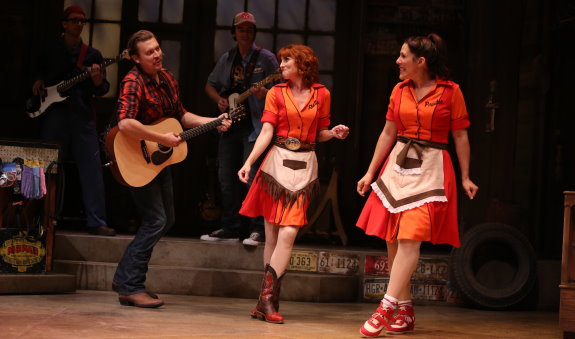 Is Pump Boys and Dinettes appropriate for kids?

Pump Boys and Dinettes doesn't really have a plot. The show is essentially a character sketch of the lives, loves, and ambitions of the four Pump Boys who run the gas station and the Dinettes, Prudie and Rhetta Cupp, who run the Double Cupp Diner. Not much happens there on that frozen-in-time corner of the world, but there is plenty to reflect on, imagine, and sing about. So there are no events to track. (In a sense, that's refreshing because you don't have kids elbowing you, whispering, "What just happened?")

So what will keep your family engaged?

The music: Pump Boys and Dinettes is mostly, though not exclusively, sung rather than spoken. The music is a blend of rock and country. One thing that makes Pump Boys and Dinettes unique as a musical is that there is no pit band or orchestra: The six people on stage are the band: When one of the members is singing, everyone else is on some instrument backing them up.

The cast: As we have all come to expect from Geva, the six members of the Pump Boys and Dinettes cast are fabulous--enthusiastic and spot-on with the wonderful harmonies. All of them are actors from the New York City area. As they show us during a special talkback session after the show on Sunday, September 22, the chemistry between the performers goes beyond simple professionalism: They enjoy the show, and they enjoy being together.

The set: Brilliantly designed by Vicki Smith, the set of Pump Boys and Dinettes makes you feel as you do when you're in a Cracker Barrel restaurant: Warm, down-homey, and decorated with stuff on which you can feast your eyes. The set is on the one hand muted, as if it has a bit of age to it, but with gorgeous splashes of red. My kids loved the beer bottles up on the top shelf, the old license plates on the wall, and the warm, inviting, and familiar counter seats in the Double Cupp.

The shattering of the Fourth Wall: In a typical show, the performers are not "aware" of the audience. Not so with Pump Boys and Dinettes: This show is designed explicitly to break the "fourth wall" for a level of interaction with the audience that will surprise and delight your kids. The actors have latitude for a degree of improvisation that is reminiscent of a stand-up routine.

Pie on Stage: The most fun way that the "fourth wall" is shattered is that the audience can come right up on stage and purchase pie and drinks before the show and during intermission: My daughter loved seeing the props up close and personal while we purchased a delicious slice of apple pie. (Cherry and pecan pie are also available; pies are supplied by the Special Touch Bakery, a division of the Jimmy W. Wilmot Adult Day Training Program at Holy Childhood, which assists adults with developmental disabilities.)

Pump Boys and Dinettes runs only one hour and 40 minutes, so even if you bring the kids on a school night, you'll be back home by bedtime.

“Worry is like a rocking chair,” says Jim, the chief Pump Boy. “Gives you something to do but it don’t get you nowhere.”

So true. There's no need to worry about whether your kids will like Pump Boys and Dinettes, as long as they like rock and country music and a fair amount of gentle slapstick. And, of course, pie.

Pump Boys and Dinettes is playing at Geva Theatre Center in Rochester through October 13, 2013. Click here for more information and to purchase tickets. Remember, tickets for ages 5-18 for remaining Pump Boys and Dinettes shows are half-price! (Ask for the Dinette Special when you place your order at the box office.) And use Geva's correct phone number, which was listed incorrectly in our recent e-newsletter. The correct phone number is 585-232-4382.

Debra Ross is Publisher of KidsOutAndAbout.com and editor of its Rochester, NY site.