Voices of Freedom Summer | Kids Out and About Rochester 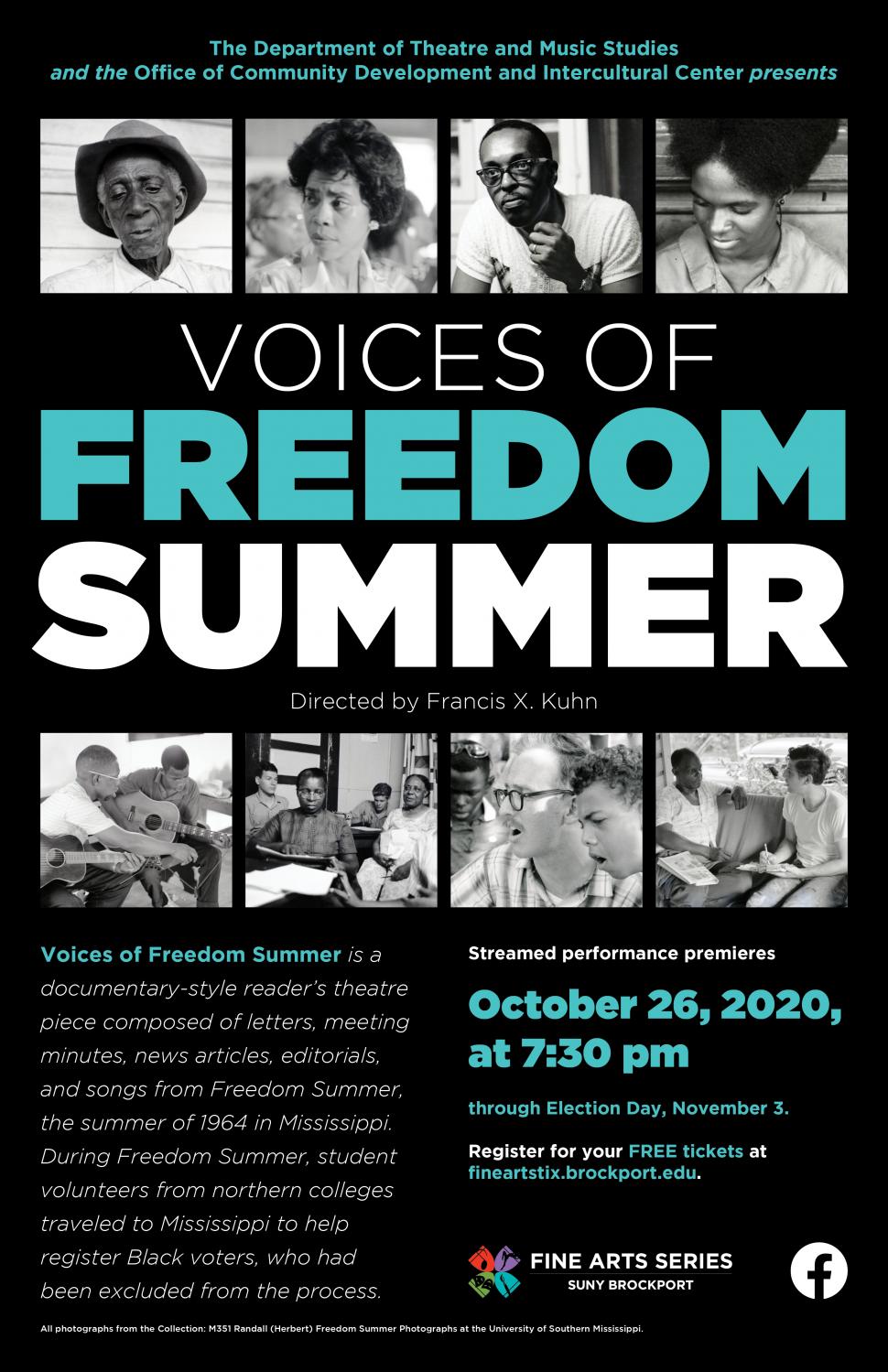 Voices of Freedom Summer is a documentary-style reader’s theatre piece composed of letters, meeting minutes, news articles, editorials, and songs from Freedom Summer, the summer of 1964 in Mississippi. During Freedom Summer, the Student Nonviolent Coordinating Committee (chaired by the late John Lewis) invited student volunteers from northern colleges to help register black voters in Mississippi, where they had been excluded from the process.
Click here for more information about this activity
Please help us keep this calendar up to date! If this activity is sold out, canceled, or otherwise needs alteration, email mindy@kidsoutandabout.com so we can update it immediately.

During the summer of 1964, months before a momentous presidential election, hundreds of college students from the North traveled to Mississippi intent on registering some of the state’s Black citizens to vote. Letters and journalistic accounts of what transpired that summer have been gathered into a dramatic documentary, Voices of Freedom Summer, which is being co-produced by SUNY Brockport’s Department of Theatre and Music Studies along with The Brockport Office of Community Development and Intercultural Center. Given the current COVID-19 pandemic protocols, the piece will be presented as streamed content, premiering on Monday, October 26, 2020, at 7:30 pm. The video will be available in an on-demand basis through November 3, Election Day. Though the event is free, patrons must register online at fineartstix.brockport.edu in order to receive the link to view the performance. Registration will commence on October 12, 2020, at 9 am, and patrons may contact the Tower Fine Arts Center box office for guidance, if necessary, at (585) 395-2787.

Frank Kuhn, a professor in the Department of Theatre and Music Studies, created the piece while he was teaching at The University of Southern Mississippi, and is directing it again. “When I mounted this piece in Mississippi in the late 1990s,” Kuhn recalls, “someone asked why I would want to ‘dig up them old bones.’ Both Black and white parents of my Southern Miss students wondered the same thing.” Being a Northerner who lived and worked in Mississippi gave Kuhn an interesting perspective. He admits that “more than one person commented that it took an outsider to put the project together. [The state of Mississippi] has changed, but not enough. When I taught there… there was much conscious and unconscious stereotyping and de facto segregation. On the other hand, I never saw graffiti with the ‘n-word’ there. Shortly after I moved to Brockport, I saw it drawn in the dirt on the Canal path.”

Putting together a production during a pandemic meant facing numerous challenges. One of them would be a need to rehearse the cast individually. This forced separation does not help when it comes to traditional cast bonding, either socially or over the difficult themes in which Voices trades. But working with them has led Kuhn to believe “our students are of a generation that has a dedication to equity, inclusion, and parity in general, and against discrimination, more than many recent generations. In conversations about the events that transpired this past summer, it seems that the students relate to the material because they see similarities between that time and this. And, if there is any positive comparison between the election cycles of the summers of 1964 and 2020, it’s seeing young people getting out of their comfort zone and committing themselves to help make the world a better place. It’s happening again.”

Lessons learned from the mobilization of all those students all those years ago include a realization that we should all be striving for one America, protecting everyone equally under the law. There shouldn’t be a Black American and a white America. Or a Democratic America and a Republican America. Or a rich America and a poor America. How can that be accomplished at this point in time? Kuhn’s response is what’s on most everyone’s minds lately: “Voting is important, and everyone’s voice must be heard”

More information about the Fine Arts Series at The College at Brockport can be found at brockport.edu/academics/fine_arts