KidsOutAndAbout Reviews Rapunzel! Rapunzel! | Kids Out and About Rochester

“Rapunzel, Rapunzel, Let down your hair!”

From bedtime stories to the Disney animated film Tangled, this is a line that long has permeated pop culture.

While earning a theater degree in college, I played “the witch” in an acting class. So I unfortunately learned the darker, deeper meaning of the Brothers Grimm's 1812 story of Rapunzel. But I send a big thank you to the Rochester Children’s Theatre and Nazareth College Arts Center for not only keeping this production light, but making it quite funny.

Rapunzel! Rapunzel! A Very Hairy Fairy Tale continues at Nazareth College Arts Center through Sunday, November 10, 2013. In this musical version, not only is a prince (Sir Roderick, played by the handsome Alec Powell) pursuing Princess Rapunzel, but so, too, is his best friend, Edgar, who just happens to be a hairdresser searching for the perfect head of hair. George Barberi plays Edgar purposefully flamboyant while working his gold shoes, brightly colored clothes, scissors, and songs.

One of his customers just happens to be Rapunzel’s aunt, who is the tower-locker-upper in this show, a lighter-hearted form of imprisonment because she gets to be queen if Rapunzel stays tucked away until her 18th birthday. 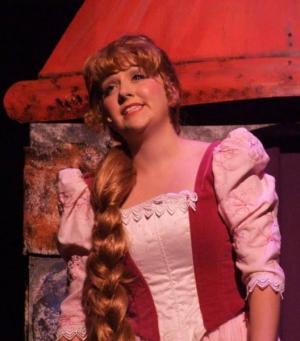 Aunt Lady Za Za is wonderfully played by Sammi Cohen, who sang the part so impressively that at one point I thought she was lipsyncing to a soundtrack. But, no, she’s just that talented. A standout performance was her bluesy number in the hair salon, “It’s All About Me” (shout out to talented musical director Bob Dietch!).

The story is set up by Socrates, a friendly dragon who breathes fire and is Rapunzel’s caretaker. Rusty Allen wittily plays the roles of trusted friend and narrator. As Rapunzel, Mandy Hasset’s adorable looks, bubbly persona, and clear, sweet voice are reminiscent of the lead character in the Tangled movie, which many in the audience will have surely seen.

One of the most entertaining songs is performed by pals Rapunzel and Socrates — “Nothing Rhymes with Rapunzel.” Here Rapunzel declares that her name sounds like stinky feet …

While the kids enjoyed the slapstick and songs, the humor aimed at the adults came from the Yiddish-spoutin’ Gypsy Woman, played with steady consistency and clever characterization by Marge Mattioli.

RCT once again produced an attractive set, notably the detail in Rapunzel’s castle (credit to Mark Scott Almekinder). The lighting (credit to Beth LaJoie) and scenery in the dark forest were particularly real, complete with a comedically cued up wolf howl (but, no worries, not too scary for the little ones). Here we meet some furry friends that come to life via clapping squirrel puppets operated by Lauren McDonough and Sam Vacarro (who later double as the king and queen).

Kerry Young deserves applause for her good direction of this classic tale performed with a comic slant, complete with audience participation (the children loved when the cast stormed the audience during a chase scene). And the fairy-tale magic was sprinkled across the stage via lush costumes and wigs designed by Lana Mamano.

All in all, it is an entertaining production. RCT recommends this production for children ages 5 and up and their families. Act II got off to a slow start, but that was in the scriptwriting, and not the fault of the hard-working and talented actors on stage.

The Naz staging is a regional premiere of this new play by Janet Yates Vogt and Mark Freidman. This weekend show times are at 2 p.m. Saturday and Sunday, Nov. 9 and 10 (Sunday performance will be sign interpreted). Tickets are $18 each and can be purchased online at boxoffice.naz.edu or by calling (585) 389-2170.

You can experience Rapunzel at Nazareth College Arts Center in Rochester through November 10, 2013.

Dresden Engle is a Rochester-based writer and public relations professional, and adjunct professor of communications at several local colleges.