You’ve read the book. You’ve watched the video countless times. Your kids have sung "You're a mean one, Mr. Grinch" when they think you're acting stingy. You already KNOW how the Grinch steals Christmas. So why do you ALSO need to head to the Auditorium Theater to see How The Grinch Stole Christmas?

If you’ve been waffling about taking your kids to see the show, stop it. Stop it right now and go buy the tickets. Heck, even if you don’t have kids, just go see it. You’ll be happy you did.

Dr. Seuss’s classic Christmas tale comes to life for a magical ninety minutes in this new adaptation. Being a bit of a cynic, I was skeptical as usual about whether or not the musical could hold a candle to either the book or television special. I loved reading the book to my kids (and now my granddaughter) and watching the animated version on television each year continues to be a mandatory part of Christmas.

The cool part about being a little cynical is that sometimes something comes along to wash away that cynicism and replace it with excitement and joy. This was one of the best musicals I‘ve seen in a long time.

The show opens with the Old Max the dog reflecting on his younger days, spent unhappily with the Grinch. We then get to meet the Whos, who of course love Christmas a lot. We wait several long minutes into the show before we meet the Great Green One himself, but that’s okay, we’re ready for him.

It’s not easy being green, but Stefan Karl, who plays the Grinch, sure made it look like it was. His rapport with the audience and his over-the-top portrayal of the guy whose heart was two sizes too small stole the show. He broke the Fourth Wall quite a few times during the show, to the delight of the kids especially.

Usually one finds a weak spot or two in a touring production’s cast. A singer hits some bad notes, a dancer misses a few beats here and there...but this was not the case in this production. The entire cast was strong, the dance numbers were tight, and the singing was spot on. Bob Lauder, who played Old Max, and Andreas Wyder, who was young Max, were both great. Lauder’s deep, rich baritone was complemented nicely by Wyder’s clear tenor in their duets "This Time of Year" and "You’re a Mean One, Mr. Grinch." The Audience was delighted to be invited to sing along with "You’re a Mean, One, Mr. Grinch." (Don’t worry about brushing up on the lyrics in advance--there’s a cute visual provided).

The sets and costumes were true to Seuss’ surreal, otherworldly style. Pink-hued Whoville had a lovely Christmas-y feel without hitting you over the head with conventional Christmas symbols and colors. Mt. Crumpet could have come straight out of the book. The Whos really looked like Whos, with big bellies, big hair, and lots of pattern mixing.

Dr. Seuss himself wrote some of the music for the original animated feature. All of that music was used in the live production and was augmented by some other great songs. The Grinch’s solo "One of a Kind" was a particular favorite, as was "Who likes Christmas." The entire score complemented and augmented the story well. 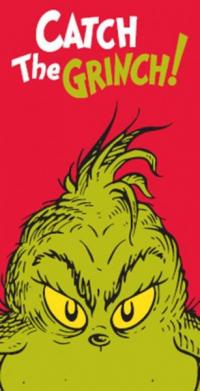 If your kids have never been to see a live theatrical before, How The Grinch Stole Christmas will provide a terrific introduction. There are lots of surprises in the staging which will delight both them and you. I’m not going to spoil them for you here, but think "Sled Scene."

If I could see it again, I would happily take my 2-year-old granddaughter to one of the matinees of this show. How The Grinch Stole Christmas is perfect for toddlers through teens and way beyond. It is short--only ninety minutes--and is fast-paced enough to keep everyone's attention. While good theatre-goers are generally quiet, this show has plenty of room for laughter and even for audience members to interact with the cast.

What I like most about How The Grinch Stole Christmas, in all of its iterations, is the message: It doesn’t matter whether you’re a little cynical like I am, or unfailing cheerful like a Who down in Whoville; Dr. Seuss reminds us that when we celebrate the season with simpler things, even a Grinch can't get in the way.