The Curious Incident of the Dog in the Night-Time is at Rochester's Auditorium Theatre through Sunday, October 2, 2016. Should you take your family? Read on for KidsOutAndAbout.com's review.

The best advice I have ever received about interacting with anyone is this: Your goal, always, is to meet people where they are. It's how we make friends, and stay friends. When everyone is striving to meet each other where they are with genuine good will, good things happen.

Most of us are either in, or know, a family where one of the members has a sensory processing disorder like autism. The very nature of the condition makes it difficult for those who have it to meet others where they are, and so the human connection needs to be made by the rest of us, though on their terms. The Curious Incident of the Dog in the Night-Time provides the ideal meeting place. And that's only one reason why you want to take your preteens and teens to the Auditorium Theatre to see the production before it leaves Rochester this Sunday. 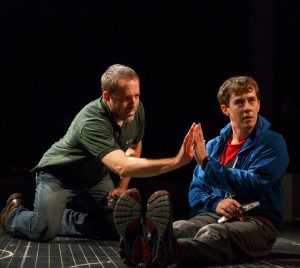 Based on the novel by British author Mark Haddon, The Curious Incident of the Dog in the Night-Time is not the typical grand Broadway-style production that passes through on tour. First, it's a play, not a musical. It's the story of Christopher John Francis Boone, a mathematically-minded 15-year-old in contemporary England who has a sensory processing disorder, though it's not specified which one. Even small disruptions in Christopher's rigidly-ordered world cause big problems.

Christopher regards most sensory stimuli as painful. He can't bear to be touched, he interprets every sentence literally, and he is incapable of lying. When anything unexpected happens, he curls up and recites prime numbers to bring some order back to his world. After he is accused briefly of the murder of his neighbor's dog, Wellington, Christopher decides that the police are not pursuing the culprit actively enough, so he must do so himself, despite multiple cautions from his father and well-meaning neighbors to leave well enough alone. His determination to solve the mystery of the heinous crime drives him to surmount the rigidities of the rituals he has devised to make functioning bearable.

The first of the two acts of The Curious Incident of the Dog in the Night-Time is the working through of the mystery of Wellington's murder and also of a second, entirely unexpected, mystery that Christopher stumbles upon in the course of his detective work. The second act is the playing out of the consequences of what Christopher has discovered. 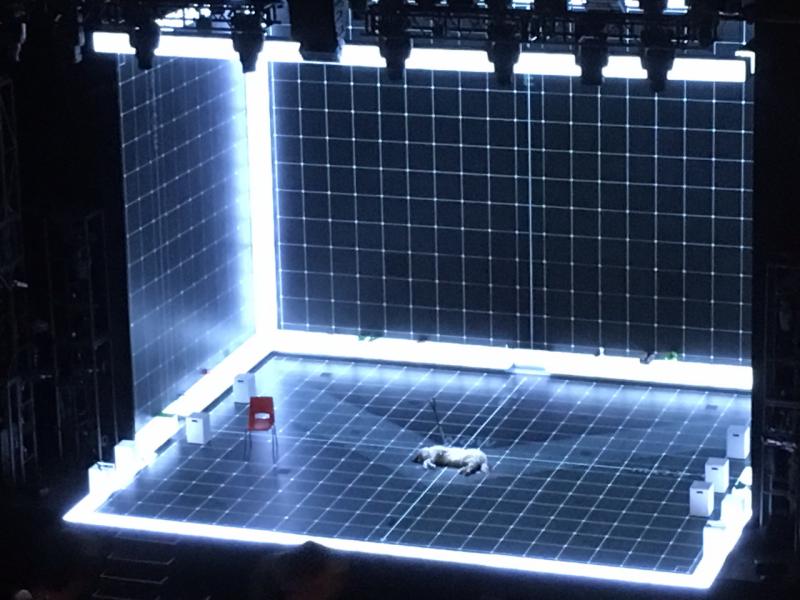 The set of The Curious Incident of the Dog in the Night-Time is a deceptively-simple high-tech box that encompasses the entire space of the stage, punctuated occasionally with simple props. It's ingenious, because it can represent both the outer world and Christopher's inner world depending on the need. Essentially, the set is made of light, which makes optics- and photonics-mad Rochester the perfect place to launch the production's U.S. tour.

This is one of the few shows at the Auditorium where the experience of the play differs depending on where one is sitting. We were up in the balcony for Tuesday's performance; this had the effect of drawing us above and away from the action. Although sitting upstairs during a musical or a grander theatrical production is usually no problem at the Auditorium, where we were sitting for this performance was actually less than ideal. After all, the set is designed to put you inside Christopher's head. So while those sitting on the floor were immersed in the experience, we were a bit outside the action. So if you have yet to purchase your tickets, I'd recommend springing for the lower level.

The story is cast as a play-within-a-play; the premise is that Christopher has written the story of the "curious incident" as a first-person book that his teacher, Siobhan, has reformulated into a play for the kids at his school to perform. It takes a little while to understand why Siobhan reads some of the lines and Christopher speaks some of them, and I would have found this useful to have known going into the play.

When you walk into the theater, what you'll see immediately is the high-tech empty set and the dog lying on its side in the middle, very dead. It's not dead in a cartoonish sense, and it's not dead in a gory sense, but it is indeed a punch-in-the-gut kind of dead. If you have a dog you love, you want to be aware of this before you bring any sensitive kids. We happen to have a dog whom we love dearly, and one of our family members (not a kid) found the fact that the dog was murdered to be a difficult fact to get past--and you do have to be able to get past it if you want to appreciate the play.

If you have problems with your kids hearing foul language, this play is not for your family. The language is minimal, and not gratuitous--after all, a murdered dog provides ample cause for the F-word to be uttered in the first sentence. But this is no Masterpiece Theater.

The plot of The Curious Incident of the Dog in the Night-Time is driven by concepts of murder, infidelity, lies, and parental betrayal. It states outright that people, in Christopher's words, "do sex." It deals intimately with the fact that some people find the real world a nightmarishly mystifying place. When you're inside Christopher's head as he tries to process a previously-ordered world that has suddenly been turned topsy-turvey, you experience his fear. It can be overwhelming. It's meant to be overwhelming. You're meeting Christopher where he is, and that can be pretty scary.

The Curious Incident of the Dog in the Night-Time uses strobe lights. Lots of them. If you have a condition that is disturbed by flashing lights, do not see the show, there's no shutting your eyes temporarily, the lights are sudden and pervade the performance. I was surprised not to see warnings about this in advance or in the lobby.

Consider the age and maturity of your kids before bringing them. The performance is rated for ages 10+. Some kids are fine dealing with these ideas at age 10, some aren't. When my kids were 10, they would have followed the play, but not appreciated it nearly as much as they do as teens.

That being said, 13 and up is the PERFECT age to see The Curious Incident of the Dog in the Night-Time, and I urge you to buy your tickets for your teens right now (student tickets prices are only $25). Teenagers live inside their own heads, and gradually come to realize that the same is true of everyone else. At the same time, they're learning how to navigate a world in which people are individuals, where each one person is different from the next. Some, like Christopher, veer pretty far from the neurotypical line, and it's important that teens come to understand that in such circumstances, the best strategy is the same strategy you should employ with everyone: Meet people where they actually are.

My kids and I have been looking forward to this performance since it was announced in March that Rochester would be the launchpad for the first off-Broadway touring production in the U.S. The girls tell me that the show is pretty much the hottest ticket among the theater-going teen set in Rochester (some had been to New York to see it on Broadway and had spread the word in advance), and after seeing this production, they knew why. In fact, I'm taking one of them back for the Saturday matinee.

And yes, this time, we'll be sitting on the floor.

The Curious Incident of the Dog in the Night-Time is at the Auditorium Theatre in Rochester through Sunday, October 2, 2016. The show runs 2 hours and 10 minutes, with a 15-minute intermission. Tickets cost $25 to $77.50 and are available online.

Debra Ross is publisher of KidsOutAndAbout.com.